Tiger Shroff Born in ( 2 March 1990 ) He is an Famous Bollywood actor And Actor, Dancer, Martial Artist In India. 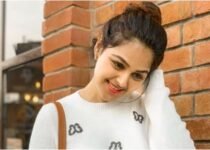