Jaideep Ahlawat was born on a (08 February 1980) in Rohtak in the state of Haryana, India. He is an Indian Actor and Film Model. 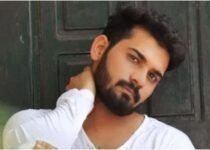