Anushka Sharma was born on (1, May 1981), In Ayodhya, in the State of Uttar Pradesh, India. She is an Indian Film Actress. 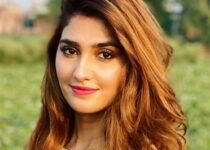